CAM co-sponsors this film with Cinema St. Louis as part of the St. Louis International Film Festival. The film is shown online only throughout the run of the festival, November 5–22, 2020.

Aggie explores the nexus of art, race, and justice through the story of art collector and philanthropist Agnes “Aggie” Gund’s life. Emmy-nominated director Catherine Gund focuses on her mother’s journey to give viewers an understanding of the power of art to transform consciousness and inspire social change. Aggie is internationally recognized for her robust and prescient support of artists—particularly women and people of color—and her unwavering commitment to social-justice issues.

Shown with Before He Starts. In this exploration of the relationship between art and politics, Zhang Hongtu—who fled China for the U.S.—journeys from New York to Kansas to paint bison and rediscovers the reason he became an artist.

Q&A with Before He Starts director Xin Fang, moderated by Michelle Dezember, director of learning and engagement at Contemporary Art Museum St. Louis.

Please note the event is online only. The link above takes you to the free screening, available throughout the duration of the 29th Annual Whitaker St. Louis International Film Festival. 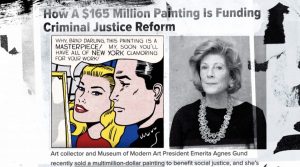