Alex Hubbard’s videos begin with private performances that are shot in a single take from above. After a flurry of activity and extensive editing, what remains is “Buster Keaton on a tabletop”—materials and actions that draw from performance art, painting, magic tricks, and cooking shows, all which are assembled, manipulated and ultimately destroyed. Cinepolis (2007) and The Collapse of the Expanded Field I-III (2007) are short, looped videos where outstretched hands occasionally enter the frame holding sheets of plastic, throwing smashed flowers, pouring puddles of water, spray-painting, burning, feathering, slashing, and then wiping it all away.

Alongside Hubbard, Paris-based artist Oscar Tuazon continues an interest in personal liberty and D.I.Y. culture, as he brings his project into the realm of architecture. For his re-formulated, collapsible tent, Tuazon draws from experimental architectural schemes such as the early building experiments of the hippy commune, Drop City, and current practices in ‘dwelling portably.’ Here Tuazon also presents two small photographs of the “Hill Lodge,” a structure he built in the hills of Oregon, along with an altered letter from Bert Davis, editor and publisher of Dwelling Portably, who responds to Tuazon’s attempts to build the hill lodge according to Davis’s original design. Together, the tent, photographs, and letter offer what Tuazon calls “a fragmented record of this kind of hardcore living experiment.”

Alex Hubbard (Born in Newport, Oregon in 1975. Lives and works in Brooklyn, New York)
Hubbard received his B.F.A. from the Pacific Northwest College of Art in 1999. He had a solo exhibition at Nicole Klagsbrun Gallery in New York in 2008 and presented work in group exhibitions at institutions including the Palais de Tokyo, Paris; the Centre Culturel Suisse, Paris; and the Whitney Museum of American Art at Altria, New York.

Oscar Tuazon (born 1976 in Seattle, Washington. Lives and works in Paris)
Tuazon is a graduate of Cooper Union and the Whitney ISP in New York. He has presented solo-exhibitions at Palais de Tokyo, Paris; Bodgers and Kludgers, Vancouver; and STANDARD (Oslo). Recent group exhibitions include The Wrong Gallery for the Whitney Biennial, New York, and Fortescue Avenue, London. Kodiak, a collaborative project with Eli Hansen, is currently on view at the Seattle Art Museum. Along with curator Thomas Boutoux, Tuazon co-founded the gallery Castillo/Corrales in Paris. 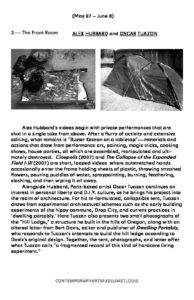