Anthony Pearson (American, b.1969) lives and works in Los Angeles. His sculptures and photographs explore the subtle visual and textural nuances produced by transforming various, primarily metallic materials according to their intrinsic properties. His Front Room project features a selection of recent “tablet” sculptures created through a procedure in which an original structure is formed from clay and then cast in bronze. He uses the malleable nature of clay in a manner similar to that of drawing, in which the material is worked and reworked—just as lines are drawn, erased, and drawn again—to make marks in space. By casting the final result in bronze, Pearson conversely engages a process typically associated with permanence and solidity. His previous combinations of photographic and sculptural work, in what he refers to as “arrangements,” highlighted unexpected resonances between the examinations of light, shadow, and surface in the two different mediums. This presentation of sculptures thus represents a significant departure in his practice by emphasizing their unique status as objects—simultaneously visually streamlined yet materially dense. 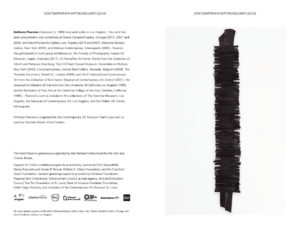