While participating in the Whitney’s Independent Study Program in New York in 2008, Beatrice Gibson, a British artist interested in music and social sculpture, invited composer Alex Waterman to collaborate on a film. Both share an interest in the sonic manifestations of visual and social phenomena, and their film, A Necessary Music, unveils the musical properties of life and social identity on New York’s Roosevelt Island. Penned as a science fiction film, A Necessary Music explores the social imaginary of a utopian landscape through directed attention to the voices that inhabit it. Formally known as Welfare Island and originally home to New York’s largest insane asylum, a small pox hospital, and a range of other nineteenth century municipal facilities for incarceration, Roosevelt Island now houses one of the city’s most visible, yet little-known modernist social housing projects. Here, the island’s residents recite lines from Adolfo Bioy Casares’ 1941 science fiction novel The Invention of Morel, and what begins as a process concerned with sociality, becomes instead an ethnographic fiction about place and community, and an investigation into representation itself.

This three-day screening and musical event in the Front Room also includes Gibson’s “video-orchestra” of London taxi drivers, as they recite an abstract path through endless city streets. Inspired by the principles of composer Cornelius Cardew’s The Great Learning (1968–71), and in collaboration with musician Jamie McCarthy, Gibson staged a live performance piece and radio work in seven parts, whereby trainee cabdrivers, musicians, architects and writers took on The Knowledge, the infamous London taxi navigation system and mnemonic device mastered by the city’s cabbies.

Beatrice Gibson was born in 1978 in London and lives and works in London. In addition to her upcoming projects at Eastside Projects, Birmingham, and the Storefront for Art and Architecture, New York, Gibson’s work has been exhibited at Objectif, Antwerp; Whitney Museum of American Art, New York; Studio Voltaire, London; and the New Museum for Contemporary Art, New York, among others. Her films were also featured at the Second Guangzhou Triennial and the Venice Biennale (2007).

Alex Waterman was born in Portsmouth, Virginia in 1975 and lives and works in New York. He is a founding member of the Plus Minus Ensemble, based in Brussels and London, specializing in avant-garde and experimental music, and in New York he performs with the Either/Or Ensemble. Waterman has made music for numerous European ballet and modern dance companies including Freiburg Ballett/Pretty Ugly, Scapino Ballet, Nederland Dans Theater III, and others. As a curator he has organized events at Les Bains: Connective in Brussels, OT301 in Amsterdam; Miguel Abreu Gallery, New York; and The Kitchen, New York. 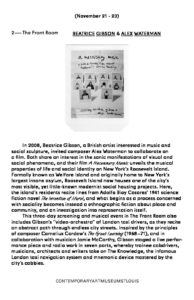