Taking its title from a character in a Buster Keaton movie, Dead Shot Dan explores the element of humor embedded in the work of the American artist Bruce Nauman. Both Nauman and Keaton share a comic take on the tragic: they tell tales of violent acts tinged with Sisyphean traps, bodily contortions, linguistic slip-ups, and misunderstandings. Like Keaton, Nauman’s sense of humor comes with a sour aftertaste, and this selection of neons, drawings, prints, photographs, and videos reflects that similarity. While Nauman, who will represent the U.S. in the 2009 Venice Biennale, works with a wide range of themes, processes, and ideas, this exhibition underlines a sense of humor that is deadpan, painful, and relentlessly tongue-in-cheek.

Bruce Nauman (born 1941, Fort Wayne, Indiana) studied mathematics, physics, and studio art at the University of Wisconsin, Madison, and then pursued an MFA at the University of California, Davis. In 1966, Nauman had his first solo show at the Nicholas Wilder Gallery in Los Angeles and in 1973, the Los Angeles County Museum of Art in New York and the Whitney Museum of American Art co-organized his first museum survey. A large-scale retrospective exhibition in 1994 was organized by the Walker Art Center and the Hirschhorn Museum, and traveled to The Museum of Modern Art in New York, the Museum of Contemporary Art in Los Angeles, and the Reina Sofia in Madrid. 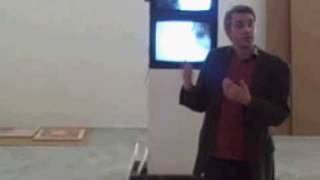 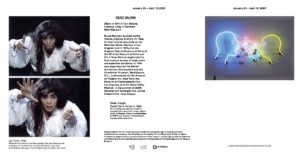