Deana Lawson, who has been named for inclusion in the 2017 Whitney Biennial, explores and challenges the conventional representations of the black body seen throughout the history of photography. Her large format photographs are highly staged and often made in collaboration with her subjects. They depict individuals, couples, and families in both domestic and public settings, visualizing ideas of kinship, ritual, identity, and desire. Lawson’s tableaux are not only intimate—her subjects depicted nude, embracing, and directly confronting the camera—but they also destabilize the notion of a passively voyeuristic relationship to photography itself. In Otisha, Kingston, Jamaica, for example, the honesty and vulnerability of the subject is laid bare. Indeed, the phrase “laid bare,” becomes an important aspect of Lawson’s portraiture. How does one truly lay oneself bare? The images become representations not only of the individuals—photographed within their home environments to lend multiple perspectives of their intimate selves—but they also document the trust built between artist and subject.

Travel is central to Lawson’s practice and for the last several years, she has been tracing the trajectory of the African diaspora by creating her images in locations as varied as Haiti, Jamaica, Ethiopia, Democratic Republic of Congo, Brooklyn, and the southern United States. Often appearing snapshot-like and seemingly documentary in nature, Lawson’s meticulously composed work blurs boundaries of time and place, and fact and fiction, thereby imbuing her subjects and settings with a near-mythical power.

Deana Lawson (b. 1979, Rochester, NY; lives and works in Brooklyn) has been selected for the 2017 Whitney Biennial. Recent exhibitions include Deana Lawson at the Art Institute of Chicago (2015), Greater New York, MoMA P.S.1 (2015, 2010), tête-à-tête at Galerie Nathalie Obadia, Brussels, Belgium (2015), and City Limit at the Journal Gallery, Brooklyn (2015). Her work has also been exhibited in the Museum of Modern Art, New York, the Brooklyn Museum of Art, and the Studio Museum in Harlem. Lawson is the recipient of a Guggenheim Fellowship (2013), Aaron Siskind Fellowship Grant (2008–09), and a New York Foundation for the Arts Grant (2006), among others. Lawson received her B.F.A. from Pennsylvania State University (2001) and M.F.A. from the Rhode Island School of Design (2004). She is currently an Assistant Professor of Photography at Princeton University. 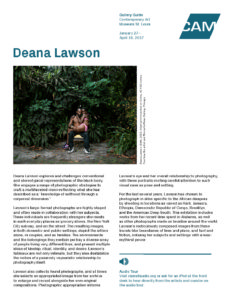 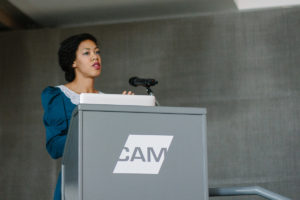