The largest definitive mid-career survey of the work of celebrated American artist Nicole Eisenman to date, Dear Nemesis, Nicole Eisenman 1993–2013 includes more than 120 works, charting the development of Eisenman’s practice across painting, printmaking, and drawing from the 1990s to the present.

Over the past twenty years, Eisenman has developed a creative and versatile vision that combines high and low culture with virtuosic skill. Fusing centuries-old art-making conventions and a multitude of art historic influences—including impressionism, German expressionism, and twentieth-century social realist painting—with contemporary subject matter, she depicts settings and themes as varied as bar scenes, motherhood, and the plight of the artist. Among her core concerns are depictions of community, identity, and sexuality.

Eisenman’s continual representation of women (both “butch” and “femme”) and female love not only imbues the practice of figurative painting with an audaciously queer bent but also recasts art history in a feminist light. Her wit spares no one and nothing, and it is indeed through her humor and the discomfort caused by her work that she communicates the multifaceted richness of the human condition. Her incisive sociopolitical critique operates through the quotidian and the absurd, in ways that are both formally playful and visually breathtaking.

Nicole Eisenman (b. 1965, Verdun, France) lives and works in New York City. Eisenman was recently awarded the Carnegie Prize for her work in the 2013 Carnegie International. Recent solo exhibitions include MATRIX 248, Berkeley Art Museum (2013); ‘Tis but a scratch’ ‘A scratch?! Your arm’s off!’ ‘No, it isn’t.,’ Studio Voltaire, London (2012); Nicole Eisenman: The Way We Weren’t, The Tang Museum, Skidmore College, Saratoga Springs, NY (2009); and Nicole Eisenman, Kunsthalle Zurich (2007). Her work has been featured in numerous group exhibitions such as NYC 1993: Experimental Jet Set, Trash and No Star, New Museum, New York (2013); the Whitney Biennial, Whitney Museum of American Art, New York (2012, 1995); Prospect.2 New Orleans (2011); and 100 Artists See God, The Jewish Museum, San Francisco (2004); among many others. Eisenman is the recipient of several awards including a John Simon Guggenheim Grant, The Joan Mitchell Foundation Grant, and The Louis Comfort Tiffany Grant. Her work is in the collections of many museums including the Museum of Modern Art, New York; San Francisco Museum of Modern Art; the Walker Art Center, Minneapolis; and The Ludwig Museum, Cologne. 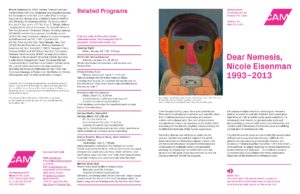 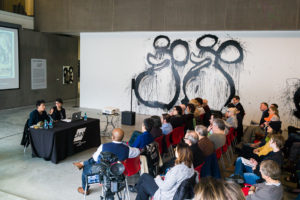 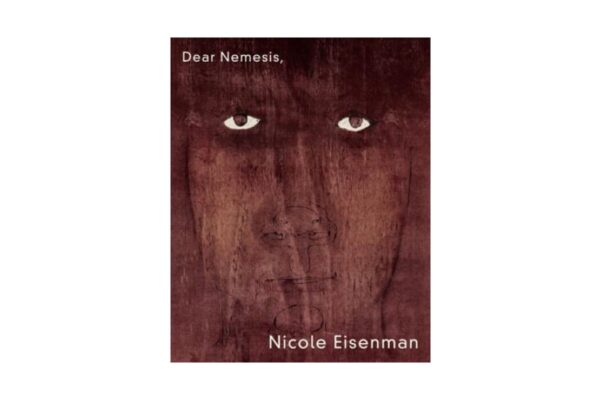