The Front Room hosts guest curator and graphic designer Bruce Burton, who presents an exhibition of flyers and posters by Ed Fella. After practicing successfully as a commercial artist in Detroit for thirty years, Fella left the commercial world to pursue independent, self-initiated experimental projects. A self-proclaimed “exit-level designer” and known for his highly skilled and original draftsmanship, Fella has used illustration, photography and graphic experimentation as vehicles for his philosophical musings on art, design, literature and typography. Fella’s exhibition in The Front Room features a small survey of his After the Fact flyers and a selection of his Venice Posters composed of images taken from his sketch books. 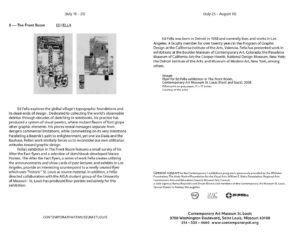