This rare presentation of Los Angeles-based artist Ed Ruscha’s 1975 short film Miracle centers on a day in the life of an auto mechanic (played by artist Jim Ganzer), who has a transformative experience while working on the engine of a Ford Mustang. Actress and singer Michelle Phillips of the Mamas and the Papas plays his love interest. Since the 1960s, Ruscha has received extensive critical acclaim for his paintings, photographs, drawings, and books exploring the commercial vernacular of Los Angeles—its graphic signage, architecture, and even parking lots. In effect, his work subtly comments on America’s cultural and socioeconomic evolution in the twentieth and twenty-first centuries. Miracle is one of only two films made by the artist in the 1970s. Also on view this fall, Thomas Bayrle’s wallpaper work Chrysler Tapete is similar in subject and contemporary to Ruscha’s film. Miracle will be shown alongside Chrysler Tapete, creating a dynamic conversation between the two works. 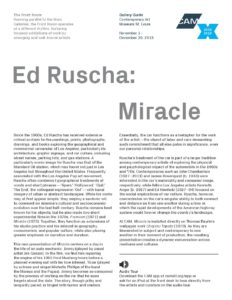