Figure Studies: Recent Representational Works on Paper brings together drawings and etchings by six artists—Ida Applebroog, John Bankston, Jennifer Bornstein, Alejandro Cardenas, Djordje Ozbolt, and Tom Reed—that demonstrate a broad range of techniques, narratives, and conceptual approaches. The exhibition suggests how works on paper have become a more central and celebrated presence in contemporary art, despite having once been considered to be secondary to the more privileged artistic formats of painting and sculpture. It also reveals how artists working in the more traditional manner of depicting things in this world, or the world of imagination, are imbuing the content of their work with distinctly contemporary concerns and sensibilities.

For example, Ida Applebroog’s (American, b. 1929, lives and works in New York) works provocatively explore how gender is represented and embodied in society and culture through rigorous experimentation with the processes and materials. John Bankston (American, b. 1963, lives and works in San Francisco) creates vibrant drawings in a style reminiscent of children’s coloring books to address issues of racial and queer identity, while Los Angeles-based artist Jennifer Bornstein’s (American, b. 1970, lives and works in Los Angeles and Berlin) small, meticulous, and slightly crude etched portraits of subjects ranging from her teenage roommate to anthropologist Margaret Mead in Samoan dress intertwine the personal, the historical, and the mundane. The elegantly spare work of Alejandro Cardenas (Chilean, b. 1978, lives and works in New York City) develops mysterious imaginary narratives through renderings of exquisite figures against stark black backgrounds. Djordje Ozbolt’s (Serbian, b. 1967, lives and works in London) drawings are created in parallel to the production of his paintings and are often used to illustrate the announcements for his exhibitions. His drawn works, like his paintings, incorporate incongruously contemporary or foreign elements into compositions mimicking art from the Renaissance through the mid-19th century as a form of political and social satire. St. Louis-based artist Tom Reed (American, b. 1968, lives and works in St. Louis) combines a formal approach informed by such visionary “outsider” artists as Joseph Yoakum and Henry Darger with knowing and intensely stylized depictions of natural phenomena and rustic settings and situations. 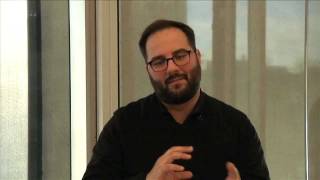 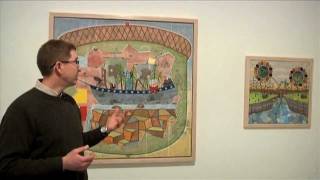 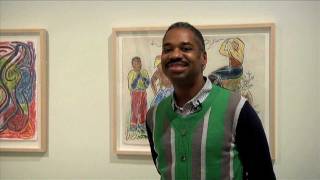 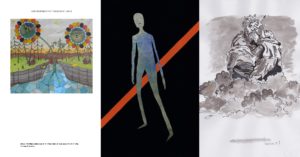