Drawings with the Eyes Closed

Drawings with the Eyes Closed is the US premiere of a series of drawings and artist’s books as well as a seminal video by Romanian artist Geta Brătescu. The exhibition provides a multifaceted look at the artist’s works in various mediums and brings together several key aspects of Brătescu’s practice: the importance of chance and play, seriality, and the significance of the artist’s studio. A central figure in postwar Romanian art, Brătescu works in a variety of media including collage, textiles, engraving, photography, video, and performance. Over a career spanning more than six decades, the artist has developed a sophisticated practice that draws equally from literature, theater, and everyday life to explore the potential of art to make sense of charged issues of identity and history.

The centerpiece of the exhibition is a series of drawings from 2008 titled Capricio (Whims). Comprising multiple hand-drawn diptychs on tempera-painted mats, Capricio features childlike images of recognizable forms: humans, animals, and shapes transposed against pastel-colored backgrounds of color fields and Brătescu’s own written script. Capricio depicts archetypal forms and suggestive shapes to which the viewer can bring his or her own associations. The repetition of these elements across the multiple drawings enables the viewer to study subtle shifts in form and emphasis that together comprise a coherent whole.

Capricio is part of a larger ongoing series of the artist’s titled Drawings with the Eyes Closed. By removing hand-eye coordination from her artmaking—literally drawing with her eyes closed—Brătescu’s gesture is closely connected to the Surrealist tradition of automatic drawing and the process of eliciting images from one’s imagination or inner consciousness. The act of leaving drawing open to an element of chance furthers the artist’s ongoing commitment to experimentation in the studio, as an autonomous space free from the influence of economic or political pressures.

In addition to Capricio, the exhibition presents never-before-seen artist’s books from 1991. Bookmaking has long been a part of the artist’s practice, bringing her drawings into three dimensions. The objects in the exhibition are also complemented by a presentation of Brătescu’s seminal 1992 video produced with cinematographer Alexandru Solomon, Earthcake. Brătescu has described the piece as a “filmed ritual.” In the video, the artist, with her face painted white and head covered in aluminum, shapes a mound of soil in the form of a disc and proceeds to earnestly consume it. In the process, she creates a poignant metaphor for artmaking’s ability to transform everyday materials into sublime objects and experiences. 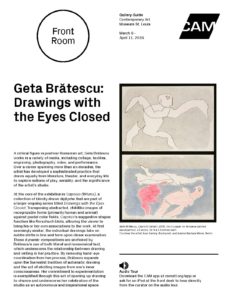