Established in 2003, the Great Rivers Biennial is a collaborative exhibition program presented by CAM and the Gateway Foundation. The initiative identifies talented emerging and mid-career artists working in the greater St. Louis metro area, provides them with financial assistance, and elevates their profile across the Midwest and national art communities. Three distinguished jurors—Lisa Dorin, Associate Curator of Contemporary Art at The Art Institute of Chicago; Jeffrey Grove, Hoffman Family Senior Curator of Contemporary Art at the Dallas Museum of Art; and Lydia Yee, Curator, Barbican Art Gallery, London—selected the three winning artists from more than 120 submissions representing a wide range of media including drawing, painting, photography, sculpture, video, and new media.

David Johnson’s (b. 1982, Austin, TX) architecturally inspired photographs consider the dynamic between the built environment and its inhabitants, seeking out unexpected interplays of light, color, and form in the public and private spheres. To create his images, Johnson works with traditional large-format photographic processes (similar to those utilized by such noted photographers as Bernd and Hilla Becher and Thomas Struth) and then produces his images digitally. For his Great Rivers Biennial project, Johnson presents a new multi-part photographic series exploring the spaces that constitute CAM’s institutional ecosystem: the museum’s galleries and offices, as well as its donors’ private homes. Shot over several months during late 2011 and early 2012, these photographs capture not only a visually arresting array of interior angles and volumes, but they also signify a dramatic shift between natural and artificial light at various times of day, particularly during increasingly shorter daylight hours to the longer nights of the winter in which they were produced.

Asma Kazmi (b. 1978, Quetta, Pakistan) works across various media to connect people, media, and objects. Her project, titled Between Word and Image, centers on the artist’s collaboration with three individuals taking part in an adult literacy program in St. Louis. Kazmi invited them to express personal accounts in the form of wall drawings. As the work’s title suggests, the drawings — which the participants execute in both sumi ink and marker on paper — are only partially legible to us as texts and visual images we can experience in the physical space of the gallery. Installed at CAM, these works are designed to challenge preconceived notions of authorship, literacy, and meaning. On the whole, Kazmi’s project brings together the artist, her collaborators, the artworks, and CAM’s viewers to create new possibilities for understanding. Kazmi will also present several related video works and live performance at CAM during the exhibition.

Born and raised in St. Louis, Mel Trad (b. 1987) reworks existing and found materials — such as wood, steel, slate, and metal — to unpredictable yet inventive ends. Her exhibition expands her spatial investigations into matter, surface, and scale in a series of works that engage modernist and minimalist sculptural practice of the twentieth and twenty-first centuries. Untitled (bondage) (2012), for example, makes visual reference to the Swiss artist Alberto Giacometti’s sculpture Woman with Her Throat Cut (1932). Giacometti famously rested his bronze figure on the floor, challenging sculpture’s historical associations with statues and monuments but even more so, his abstraction of the female form suggested a scene of intense violence. Trad, conversely, places a steel structure that she has painstakingly bent and manipulated atop a high-gloss white pedestal. In the process, she casts her interpretative version in a distinctly feminist light, re-elevating the figure to eye level and therefore encouraging empathy and intimacy between viewer and object. In addition to her freestanding sculptures installed through the galleries, Trad will present Untitled (triptych and a half) (2012), a collection of draped banners sourced from discarded industrial fabric, in CAM’s Performance Space. 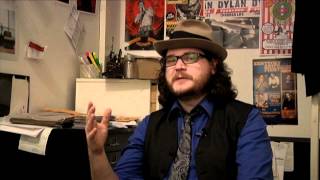 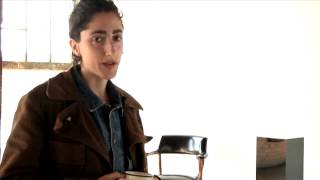 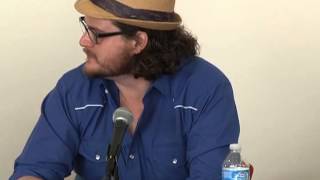 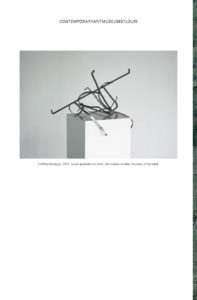