Hany Armanious takes on the role of artist, archeologist and alchemist. By digging through the refuse and cast-offs of contemporary society, he embarks on an excavation of the ritualistic origins of form making, while imbuing familiar objects with a profound archaic mysticism. Previous materials have included mud, bubbles, worms, sandpaper, manila folders, pool cues, and hot melt. Creating a magical bricolage of cast organic, found, and self-made objects, he explores the ambiguous distinction between the natural and the artificial. Disillusioned yet fascinated by the veneer of consumerism, Armanious pursues a “pure” state of materials, and finds sanctuary in the fundamental gestures and processes of the pre-industrial workshop.

In the Front Room, Armanious continues his experimentation with casting, both as a means of reproduction and as a process in its own right. His meticulous method denies the immediacy of the readymade, yet his choice of material provides visual proximity to the original forms. Polyurethane-cast tiles mark the space, which is presided over by the crumbling, prophetic obelisk. Despite its name, The Oracle disrupts our quest for meaning: at closer inspection, the inflatable toy bats are revealed as fragile glass vessels, and the soft, foamy floor tiles question the solidity of our foundations. 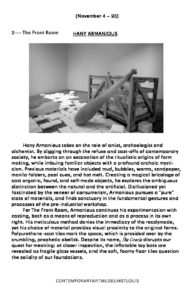