In a time when human expression is conveyed through character gestures rather than the written language, emoji are intended to illustrate, or in some cases replace, the words we digitally share, whether through text message, email, or tweet. These quick, gestural, and disposable icons exist as a digital index. Through the medium of film, artist Jennifer West sets out to counteract and deconstruct this language.

A Los Angeles-based artist, West has been making experimental films consistently since 2004. She is known for her handmade digitized films, manipulating the film celluloid through performance and conceptual practices. For CAM’s Street Views, West’s Emoji Piss Film is compiled from Google image search results for emoji. The film, which the artist refers to as a “historical document,” was initially shot in 2014, and then placed in large kombucha jars filled with urine collected from artists and friends within her community. The liquid was used to soak and corrode the celluloid, slowly eating away at the film’s emulsion. The film was then transferred to digitized HD video.

Having shown her films on such exterior spaces as New York City’s High Line, West continues to explore the insertion of art into the public context with Street Views. Other significant commissions include Aspen Art Museum and the Turbine Hall at Tate Modern in London, and her work is included in numerous public collections including the Los Angeles County Museum of Art, the Yuz Museum in Shanghai, and the Kadist Art Foundation in Paris. 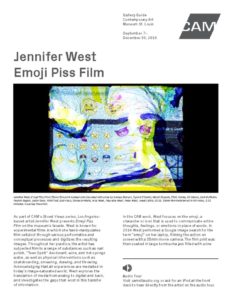