Since 1972, London-based filmmaker John Smith has made over forty films, videos and installations, presented across an array of platforms including television, movie theaters, and exhibition spaces. Strongly influenced by the Structural films that surrounded him as a young artist and keenly attentive to the immersive power of narrative and the spoken word, Smith has developed a body of work that blurs the roles of documentary and fiction, representation and abstraction. Grounded in personal experience, chance and coincidence—and drawing on the raw material of everyday life—Smith articulates a new language for cinema and storytelling. In The Front Room, Smith presents a two-week, continuous screening of a single film.

Lost Sound (1998-2001) links together static shots featuring the streets of East London. What at first seems like a straightforward documentary episode of urban life emerges as a complex, intricate discourse between environment and viewer. Divided by neighborhoods, each chapter of Lost Sound weaves establishing shots of each street with their ambient sound, alongside sly, occasional insertions of the recovered tape music found on site. In collaboration with sound artist Graeme Mille, Smith populates his film with the fragments of discarded audio tape woven into the fabric of the street—winding around iron clad fences, nestled in patches of grass, lying in gutter-water puddles. Locating these neglected and forgotten audio fragments, Smith and Mille then re-record the audio data, playing it back at intervals within the film. Addressing the fragmentary and peripheral existence of this “lost sound,” as well as its simultaneous decay and potential for cultural longevity, Lost Sound constructs an ever-shifting cinematic language that refigures the viewer’s perception of sound and image.

John Smith was born in 1952 in London, where he lives and works. His solo exhibitions include: Royal College of Art, London (2010), Ikon Gallery, Birmingham (2006), Kunstmuseum Magdeburg (2005), Open Eye Gallery, Liverpool (2003) and Pearl Gallery, London (2003). He recently participated in the Berlin Biennial (2010) and his work has been profiled through retrospectives at the 2007 Venice Biennale and film festivals in Oberhausen, Cork, Tampere, Uppsala, Bristol, Regensburg, Glasgow and La Rochelle. 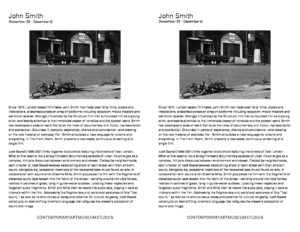