The end of the end of the end, the first American solo museum exhibition of Canadian artist Jon Rafman, features the single channel video Still Life (Betamale) as well as a selection of recent sculpture and photography from the artist’s New Age Demanded series. In his multidisciplinary practice, Rafman often explores the relationship between the “real” and the “virtual” in contemporary life, urging viewers to reconsider the boundaries between the two.

Rafman’s recent video works excavate subcultural erotica trafficked on the Deep or Invisible Web—the majority of the content on the Internet, which is not accessible through standard search engines—and celebrate the utopian possibility for online self-reinvention. Still Life (Betamale) elaborates on the artist’s earlier film works; here, assembled images of virtual landscapes address issues of social and sexual exoticism. Drawing from the aesthetics of imageboards (think Tumblr or Reddit), Rafman guides viewers through a series of vignettes culled from the Invisible Web, navigating what the video calls the “endlessly winding paths” of Furry fandoms, 8-bit video game GIFsets, Internet “troll caves,” and manga pornography.

Rafman’s New Age Demanded works comprise a series of 3D-printed busts and their 2D digital counterparts, which blur the traditional distinctions between an image and its physical analog. The anonymous, alien, digitally-derived heads collapse the contemporary and the anachronistic with a radical reimagining of the canonical Greco-Roman bust while the accompanying “photographs” relocate the physical busts to a two-dimensional plane, grafting layers of digital paint onto Internet-driven imagery.

Foregrounding the degree to which digital information permeates our everyday lives, Rafman underscores the conflict between intangible imagery and the human impulse to connect, revealing both the possibilities and limitations of virtual exploration. In combining both the physical and the virtual, his works take up an unfamiliar and uncanny third space between the two realms.

Jon Rafman (b. 1981, Quebec) lives and works in Montreal. Recent solo exhibitions include the Palais de Tokyo, Paris, and The Nine Eyes of Google Street View, Saatchi Gallery, London. His work has been featured in group exhibitions, including What Is a Photograph? at the International Center of Photography, New York, and Free at the New Museum, New York. 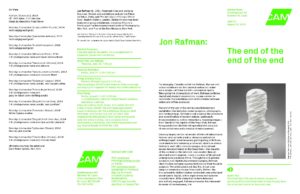 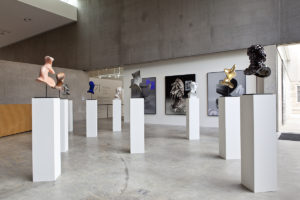