Jonas Mekas is widely regarded as a key proponent in experimental cinema in the United States, both for his own adventurous film-making and for his active involvement with the presentation of avant-garde films since the early 1960s. This presentation features Part 6 of the film project Walden, also known as DIARIES Notes and Sketches, which features footage shot between 1965 and 1969. The film embodies Mekas’ pioneering use of film to document the flow of everyday life in a diary-like fashion, and much of Walden reflects his participation in the counter-cultural social scene of New York in the 1960s. It presents fragmentary views of scenes from daily life—from a wedding to winter activities such as ice skating or sledding to people eating Sunday breakfast. Towards the end of Part 6, Mekas sets footage of John Lennon (British, 1940-1980) and Yoko Ono’s (Japanese, b. 1933) famous 1969 “bed-in” protest against the Vietnam War to a recording of “Give Peace a Chance” by the Plastic Ono Band. His documentation of the event—in which the iconic pop couple remained in bed for a week as a non-violent act for peace—counters the sensationalized coverage of the event by the media with an emphasis on more tender and intimate moments between Lennon and Ono. Walden is notable for simultaneously expanding the potential for film as an expressive medium, and capturing everyday life in an intensively personal and intimate manner.

Jonas Mekas was born in 1922 in Semeniškiai, Lithuania and lives and works in New York City. In addition to his role at the forefront of the American avant-garde film movement, he has published over twenty books of prose and poetry.  Mekas has recently presented his work in the solo exhibition, “Jonas Mekas: The Beauty of Friends Being Together Quartet” at the P.S. 1 Contemporary Art Center, Long Island City, New York (2007), and “Jonas Mekas: Celebration of the small and the personal in the times of bigness” at the Baltic Centre for Contemporary Art, Gateshead, England, (2006).  His recent films include Sleepless Night Stories (2011) and 365 Day Project (2007). 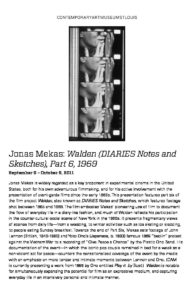