Snacks, Supports, and Something to Rally Around

Josh Faught creates exuberant large-scale textiles works that employ an array of techniques—including knitting, crocheting, weaving, painting, and sculpture—and use everyday materials such as nail polish, sequins, posters, buttons, Xeroxed images, and more. This formal pastiche is echoed in the various influences and movements that inform his practice, from suburban self-help culture and twentieth-century crafts to feminism and queerness. Invoking familiar items like granny squares and felted sweaters as well as cultural touchstones like the AIDS Memorial Quilt (1987), Faught’s work demonstrates the ability of fiber to be the source of both personal comfort and political agitation. He presents a new body of work in the Front Room.

Josh Faught (b. 1979, St. Louis) lives and works in San Francisco. He has had recent solo exhibitions at Lisa Cooley, New York (2012, 2010); Western Bridge, Seattle (2010); and the Seattle Art Museum (2009). His work has been featured in group exhibitions at University Art Museum, Albany (2012); Tanya Bonakdar Gallery, New York (2011); Portland Museum of Contemporary Craft (2009); and Hyde Park Art Center, Chicago (2007), amongst others. Faught is the recipient of the Louis Comfort Tiffany Foundation Grant (2011) and the Betty Bowen Award, Seattle Art Museum (2009). He received an MFA from the School of the Art Institute of Chicago and is currently an Assistant Professor at the California College of Arts.

Josh Faught: Snacks, Supports, and Something to Rally Around is organized for the Contemporary Art Museum St. Louis by Kelly Shindler, Assistant Curator. 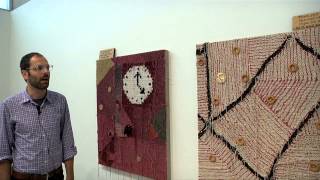 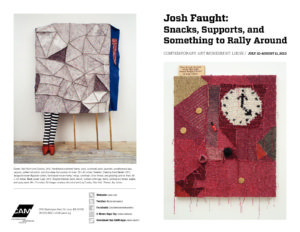