This project by Kerry James Marshall—one of America’s most significant living artists—is presented by CAM as part of its ongoing Front Room series. Based in Chicago, Marshall is internationally celebrated for a sophisticated and diverse body of work that addresses the complex history of race in the United States and the artist’s role as an interpreter of that legacy. Garden of Delights takes the form of a domestic garden to look deeply into the everyday realities of life of African Americans within a larger historical context. It coincides with the June 2013 opening of the Saint Louis Art Museum’s new East Building expansion, where Marshall’s iconic work Watts 1963 (1995) is on view.

Kerry James Marshall was born in Birmingham, Alabama, in 1955 and lives and works in Chicago. In 2013 his work was presented in solo exhibitions at the National Gallery of Art, Washington, D.C., and the Museum van Hedendaagse Kunst, Antwerp, Belgium. Other one-person exhibitions include presentations at the Secession, Vienna (2012), the Millstone Gallery, Washington University, St. Louis (2011), the Vancouver Art Gallery (2010), the Camden Arts Centre, London (2005), and the Museum of Contemporary Art, Chicago (2003.) His work has been featured in such prominent group exhibitions as Take me to Your Leader: The Great Escape into Space, National Museum of Art, Oslo, and Production Site: The Artist’s Studio Inside-Out, Museum of Contemporary Art, Chicago (both 2010); 30 Americans, The Rubell Family Collection, Miami, Florida (2008); the Venice Biennale (2003), the 1999/2000 Carnegie International, Carnegie Museum of Art, Pittsburgh, PA, (1999), and Documenta X, Kassel, Germany (1997). 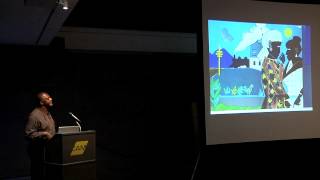 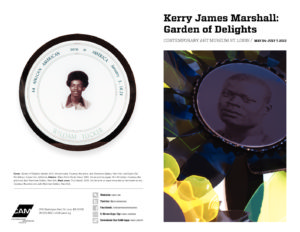 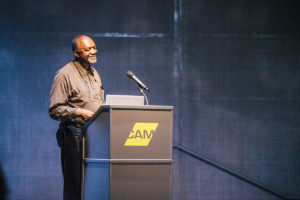