The Ensemble and the Self

Using Trenton Doyle Hancock’s work Good Vegan Progression #4 as a starting point, teaching-artist-in-residence Robin Verhage-Abrams introduced LEAP artists to costume design for performing arts, and provided guidance in how to translate ideas into 3D textile expressions. Building upon a collectively established theme, the artists conducted research to personalize their individual designs. The artists were encouraged to create a costume design that occupied a place in Hancock’s ever-evolving environments, yet were from their own individual sensibilities. In the process, the students not only learned about Hancock’s artistic practice, world-building, and the wild array of characters he has created–many out of his own personal mythology–but they also found, explored, and exposed their own alter egos.

LEAP Middle School Initiative: The Ensemble and the Self is organized for the Contemporary Art Museum St. Louis by José Garza, Museum Educator. 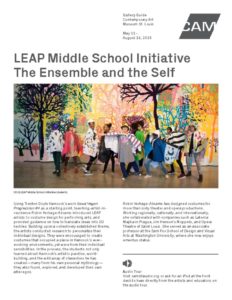