I Sing the Body Electric

French artist Lili Reynaud-Dewar’s performances and installations address notions of femininity and how the body moves in space. Titled after a Walt Whitman poem, I Sing the Body Electric features two videos of the artist dancing in the empty galleries of the Arsenale and Central Pavilion following the close of the 56th Venice Biennial in 2015, where her work was featured. We watch Reynaud-Dewar galloping and sashaying alone through vast spaces, her gestures recalling modern and folk dance as well as yoga poses. Painted red, her nude figure hovers between object and subject. Though appearing lighthearted and playful, the artist evokes disparate references ranging from the art historical, such as Henri Matisse’s dancers, to the sociopolitical, in the image of a bloodied body. Reynaud-Dewar’s dancing is interposed with still images of flowers, which suggest themes of beauty, memento mori, and even interior design. The videos also capture quiet interstitial moments in which the artist appears lost in thought or is engaged in such everyday activities as smoking a cigarette or checking her phone. At CAM, the installation of bright red carpet—strewn with silk scarves featuring images of the artist in various performative gestures—throughout the Museum’s mezzanine lends further materiality and texture to the imagery and action featured in the videos. In staging her work in the grand architectural spaces of the Venice Biennial, the oldest and most venerable exhibition of contemporary art in the world—and creating a new environment in which to view it—Reynaud-Dewar literally asserts herself within the larger narrative of the history of art.

Lili Reynaud-Dewar (b. La Rochelle, France, 1975) lives and works in Grenoble, France. Recent solo exhibitions and projects have been presented at Index, Stockholm, Sweden (2014); New Museum of Contemporary Art, New York (2014); Le Consortium, Dijon, France (2013); Le Magasin, Grenoble, France (2012); and Kunsthalle Basel, Switzerland (2010). Reynaud-Dewar’s work has also been included in a number of international group exhibitions, including the 56th Venice Biennale (2015); the 12th Lyon Biennial (2013), the Paris Triennial (2012), and the 5th Berlin Biennial (2008), and has been exhibited at institutions such as Museum of Contemporary Art Chicago (2015); Witte de With, Rotterdam, Netherlands (2014); and the Studio Museum in Harlem, New York (2013). Reynaud-Dewar has held a professorship at the Haute Ecole d’Art et de Design, Geneva, since 2010, and she co-founded the feminist journal Pétunia in 2011. 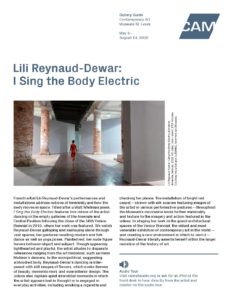 Museum premiere of video work by Lili Reynaud-Dewar On view May 6–August 14, 2016