Margaret Salmon, an American and British filmmaker based in London and New York, creates works that feature straightforward presentations of scenes and situations from everyday life. She often presents different examples of footage alongside one another to exaggerate slight differences between very similar situations, or makes subtle use of cinematographic techniques to bring depth and meaning to otherwise mundane phenomena. Salmon’s Front Room presentation will feature Everything that rises must converge (2010). The films depict two different blonde-haired little girls occupied in identical activities (such as eating or riding on playground rides), though shot at different times of day, with varying degrees of light, and with the footage of each girl flipping from one monitor to the other midway through the 8 minute duration of the work. The work derives its name from a short story by American author Flannery O’Connor’s that focuses on the opposite perspectives on race of a mother and her young son in the Deep South of the United States and reflects the themes of childhood and difference represented in the juxtaposition of the two films.

Margaret Salmon was born in 1975 and lives and works in Kent, London, and New York. Her work has been featured in solo exhibitions at the Whitechapel Art Gallery, London; and the Witte de With, Rotterdam; and in such group exhibitions as the Berlin Biennale (2010); the Venice Biennale (2007); and the New Contemporaries exhibition at the Liverpool Biennial and at the Barbican Arts Centre, London.  This Front Room exhibition would be her first solo museum exhibition in an American museum. 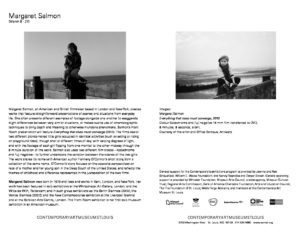