Marina Zurkow focuses her work on the intersection of nature and culture, offering wry and pointed critiques of this perilously dysfunctional relationship. She has spent extensive amounts of time researching what she refers to as “wicked problems” involving invasive species, superfund sites, and a worldwide dependence on petrochemicals. During a two-week residency supported by the Houston-based art center DiverseWorks, Zurkow traveled to Texas’s Permian Basin, from Marfa to Midland, meeting with geologists, naturalists, cattlemen, oilmen, and activists. Most everyone who lives on the U.S. power grid relies on petrochemicals for food, shelter, clothing, and mobility; yet few realize that the oil-based products that fuel so much of our lives emerge from this expansive plateau known as “The Big Empty.” Oil excavation relies on vast amounts of water taken from a semi-arid plain. The Thirsty Bird offers parallel narratives on two essential, yet incompatible elements: oil and water. 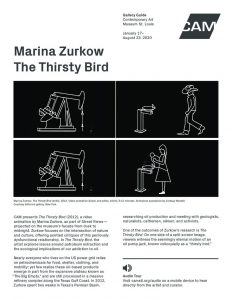