Receive Calls on Your Cell Phone from Jail

Through a signature collage process, Los Angeles-based artist Mark Bradford abstracts the geographic, political, and socioeconomic landscape of American cities. He composes his works by affixing found materials—such as billboard posters—to canvas, often searching his South Los Angeles neighborhood for signage and rooting his work in the realities of urban life. In his mixed-media compositions, paper replaces paint and is often torn, glued, sanded, and saturated with water to create a malleable pulp: materials that cling to the city are repurposed and given a renewed agency. While formally furthering the legacy of Abstract Expressionism, Bradford’s work has a unique cartographic quality that visualizes how communities are mapped or quantified. Through his use of materials, Bradford’s form of abstraction looks outward to respond to the charged social milieu in which they are made.

CAM presents the museum debut of Receive Calls on Your Cell Phone From Jail (2013), a grid of thirty-eight paintings comprising posters that convey the challenges surrounding receiving collect calls from prison on one’s cell phone. Many cell phone providers restrict subscribers from receiving collect calls, making this act of communication sometimes illegal and often difficult to enact, further isolating incarcerated individuals from the outside world. Exhibited on CAM’s sixty-foot-long Project Wall, the installation can be “read” from left to right, embodying a melancholic passage of time. Bradford builds up and then tears down these work’s surfaces, asking viewers to consider how incarcerated people might feel consumed, abandoned, and discarded by the criminal justice system.

Also on view, in the Front Room, is Bradford’s single-channel video Practice (2003), which depicts the artist playing basketball on an outdoor court. Wearing a makeshift outfit that includes a Los Angeles Lakers uniform and a voluminous antebellum-style hoop skirt, Bradford is impeded by both the wind and the physical constraints of his cumbersome wardrobe. He repeatedly stumbles and falls, only to recover and continue shooting baskets. Imbued with humor, irony, and absurdity, Practice demonstrates a determination to persevere in the face of cultural, gender, and racial obstacles, both past and present.

Mark Bradford (b. 1961, Los Angeles) lives and works in Los Angeles. In 2014 Bradford was presented with the National Medal of the Arts. In 2013 he was elected as a National Academician by the National Academy Museum and School of Fine Arts in New York. He is also a recipient of The MacArthur Fellowship (2009); the Wexner Center Residency Award (2009) and the Bucksbaum Award, granted by The Whitney Museum of American Art (2006). Recent solo shows include Scorched Earth, Hammer Museum, Los Angeles (2015); Sea Monsters, Gemeentemuseum den Haag, The Hague (2015), and The Rose Art Museum, Waltham, Massachusetts (2014); MATRIX 172, Wadsworth Atheneum Museum, Hartford, Connecticut (2015); Tears of a Tree, The Rockbund Art Museum, Shanghai (2015); and a major touring exhibition presented at the Wexner Center for the Arts, Columbus (2010), which traveled to Institute of Contemporary Art, Boston (2010); Dallas Museum of Art (2011); Museum of Contemporary Art, Chicago (2011); and San Francisco Museum of Modern Art (2012).   Bradford has exhibited widely in numerous group presentations, such as Wasteland, presented by Los Angeles Nomadic Division at the Mona Bismark American Center, Paris (2016); America is Hard to See, The Whitney Museum of American Art, New York (2015); Sharjah Biennial 12: The past, the present, the possible, Sharjah, UAE (2015); and Variations: Conversations In and Around Abstract Painting, Los Angeles County Museum of Art (2014).

Bradford is co-founder of Art + Practice, an arts and education private operating foundation based in Leimert Park, Los Angeles. Since its founding in 2013, the foundation’s mandate has been to create an educational platform that supports the acquisition of practical skills for foster youth and stresses the cultural importance of art within a larger social context.

Mark Bradford: Receive Calls on Your Cell Phone From Jail is organized for the Contemporary Art Museum St. Louis by Jeffrey Uslip, Deputy Director for Exhibitions and Programs / Chief Curator. 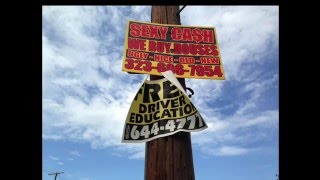 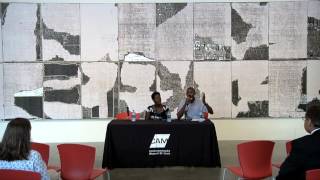 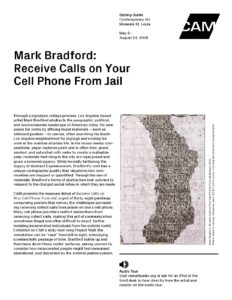 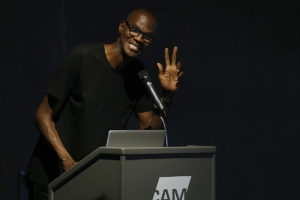 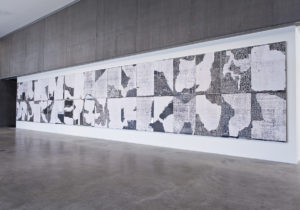 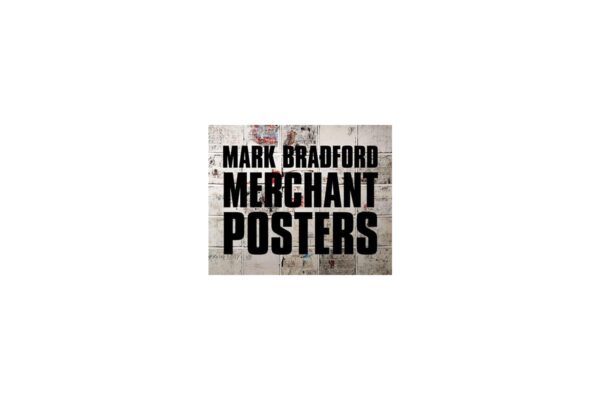 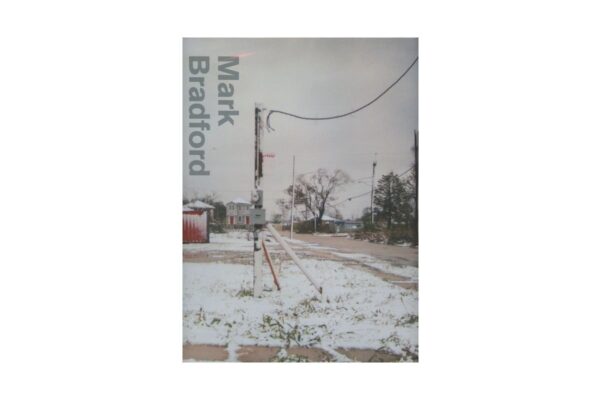 Museum debut of work by celebrated artist Mark Bradford On view May 6–August 14, 2016