Rooted in a tradition of “cheap art,” Max Schumann paints on ordinary cardboard panels. His expressionistic scenes are assiduously copied from advertisements, newspapers, TV news, or films. Overlaid with short texts, the images take on new meanings, as a green landscape becomes a war scene or an ad for a pick-up truck turns into political propaganda. Schumann frequently paints the same image again and again. This strategy, faithful to the persistence and repetitions inherent in his source media, also allows for the distinctions between ‘identical’ works to emerge. 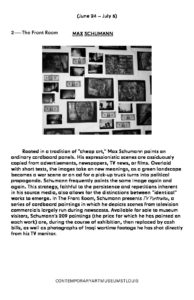