The Contemporary Art Museum St. Louis is pleased to present two recent single channel video works by New York-based artist Michael Paul Britto as our Contemporary Project Series 2006. Britto is interested in reevaluating historical circumstance with a humorous corrective lens, and in an immediately recognizable and accessible format. Aware of the recent revival of interest in cinema and 1970s culture, particularly interest in the proliferation of action and Kung-fu B movies, Britto acknowledges the influence of a genre that largely disappeared into obscurity in the 1980s. While textbooks may tell us about Tubman’s legendary accomplishments that altered the course of American history, Britto adds another dynamic layer to the woman who brought freedom to so many—that she was also young. Co-opting tropes of blaxploitation by bestowing Tubman with youth and a persona that matches her revolutionary actions, Britto presents an identifiable legend. Just as the films that provide source material for Britto’s work generated a huge poster industry, he likewise has created a drama-filled poster to accompany his trailer. This comical trailer and poster call attention to a continuing struggle for freedom and self determination that is still evident even among a post-80s generation. 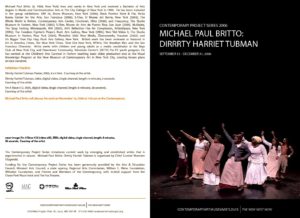