Paintings without Borders 2 is New York-based artist Ned Vena’s first solo museum exhibition, featuring new work made expressly for the artist’s presentation at CAM. Vena’s austere monochrome paintings and abstract compositions evoke a myriad of 20th-century influences from Kazimir Malevich to Frank Stella. Yet, despite his affinity with historical precedents, Vena is primarily known for his unconventional use of industrial materials and techniques, including Rust-Oleum paint and rotary cut vinyl stenciling.

Similar to his recent work, Vena’s new paintings use the letter “G” as the point of departure. Whereas earlier iterations presented the works as pristine, white, recognizable letters in a collegiate-style font, Vena’s exhibition at CAM features the letter “G” repeated, painted with an industrial aluminum finish, and fluidly fused into an abstract shape, evocative of a chain link fence. In the artist’s words, “This newly reduced legibility functions as a concrete poem. If read, it would go something like this: ‘G,G,G,G,G,G,G,G,G,G,G,G,G,G, and G,’ something like a drawn out choking, gurgling, engine revving sound…”

Vena’s act of replication suggests an assembly line, seemingly removing the artist’s hand. Upon closer inspection, however, each painting reveals the presence of distinct characteristics such as indentions, accretions and brushstrokes, demonstrating individuality within repetition. This body of work shifts Vena’s locus of visual rhetoric from modernism to absurdism and linguistic humor. 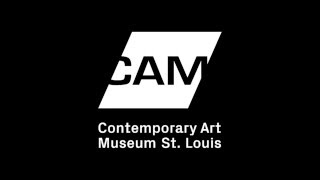 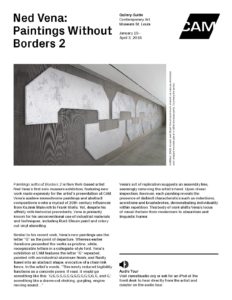