In their spirited and fast-paced dance with color, geometric shapes, and collage, American artist Robert Breer’s films, drawings, paintings, and sculptures remain as fresh and prescient as ever. Over the course of a career spanning more than fifty years, Breer found himself, both critically and personally, aligned with major figures of the twentieth-century avant-garde—across movements from Minimalism to Pop and Fluxus—but he always remained outside of any particular movement or ideology. Instead, he developed his own singular vision that sought to explore the possibilities of abstraction while at the same time infusing his imagery with a distinctly human warmth. Breer also taught film and animation courses at New York City’s Cooper Union from 1971-2001. His influence upon his students and, by extension, the landscape of contemporary film-making is evident in the proliferation of techniques that he pioneered and which we now see all the time: a combination of still photography and moving imagery, line drawing, rapid editing, and an emphasis on archetypal forms. 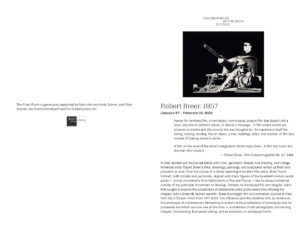