Los Angeles artist Lesley Vance’s small painted compositions—comprised of shells, horns, coral, and flowers in bloom or decay—both isolate and suspend the organic form. Her enamel-like surfaces, at times brittle, porous, or wilting, point to the traditions and refinements of the still-life genre, while propelling it towards abstraction.

A recent graduate from Yale’s sculpture program, Sam Moyer’s objects and photographs often feature traces of an event—an explosion of white steam, a generator, a smoke machine, a light fixture from a movie set. In the Front Room, she presents a sculpture emulating a house of cards, along with new photographs depicting Willie Nelson at the end of a concert.

A pioneer in the development of experimental film and live-action animation techniques, the late Stan VanDerBeek achieved widespread recognition as an American avant-garde filmmaker. An advocate of the application of a utopian fusion of art and technology, he began making films in 1955, and his multimedia experiments include movie murals, projection systems, planetarium events, and the exploration of early computer graphics and image-processing systems. The Front Room features a selection of VanDerBeek’s series of early paintings, presenting an added layer to his already expanded practice across media. 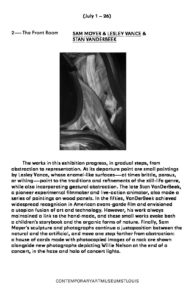