For his Front Room exhibition, artist and composer Scott Benzel presents two new sound installations that utilize the distinctive dynamics of CAM’s signature mesh and concrete architecture within its exterior spaces. String Quartet No. 2 (2011) greets visitors at the museum’s entrance with drones, wails, hums, and hammerings that mimic the sounds of a city street. Together, the bass, cello, viola, and violin conjure a car alarm, a halting train, and a helicopter overhead. Drawing loosely from both String Quartet No. 2 (1983) by Morton Feldman (American, 1926-1987) and the use of everyday sounds in the works of experimental composer John Cage (American, 1912-1992), Benzel offers a composition that simultaneously describes waste—those sounds we consider irksome or superfluous in our daily lives—as well as the blurred distinction between representation and abstraction in music.

Enveloping CAM’s Courtyard, Sines (for Michael Asher) (2011) is a four-channel installation in which silence interposes extended individual sounds, each with a singular, unerring pitch. Each monotone sound, here a “sine wave,” is ascribed a specific color, as Benzel offers the experiential possibility of synesthesia, or the marriage of two senses. The work nods to the early interventions of conceptual artist Michael Asher (American, born 1943), which featured subtle (even invisible) visual or architectural shifts within the space of a gallery. For his presentation at CAM, Benzel creates a quartet of extremely minimal sounds and their invisible color counterparts as a test of the viewer’s changeable perception of the space. Deriving each individual sound from a different tone scheme and synesthetic color, the work suggests that the monotone in music is what the white monochrome is to painting. In effect, Benzel proposes a bridge between visual experience and the space of sound, asking the viewer to consider whether the “colors” of the individual tones can be “heard” as one navigates the Courtyard.

Scott Benzel was born in 1968 in Scottsdale, Arizona. He lives and works in Los Angeles, where he has performed, recorded, curated, and presented sound works and installations at institutions such as The American Composer’s Forum; the Los Angeles County Museum of Art; the Society for the Activation of Social Space through Art and Sound (SASSAS); and West of Rome Public Art; among many others. Benzel is a frequent collaborator with the artist Mike Kelley, and their performances have been staged at institutions and galleries throughout the U.S. and Europe. Benzel has produced several recordings in recent years, including MUSIC FROM THE TRIP IN THE STYLE OF…(Oodpress / Numero Deux, 2011); , (Numero Deux, 2010); and BLAK BLOC FOR STRING QUARTET AND FEEDBACK (Numero Deux, 2009). Benzel’s presentation in the Front Room at CAM constitutes the artist’s first museum exhibition. 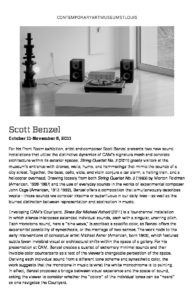