Television Delivers People features a scrolling yellow text against a blank blue background that elaborates on how the primary rationale for television and other mass media is to use the dissemination of cultural entertainment as a way to “deliver people” to the commercial interests of advertisers. Serra’s still-relevant use of a then-new medium to convey a powerful (if subtle) political message will be paired with one of a new series of PowerPoint presentation works by King each titled Silence Lecture comprising images combined with quotes by philosophers and thinkers well-known for their commentary on media culture—for example, Noam Chomsky or Marshall McLuhan—that the artist has “invented.” King’s flow of images and texts in the educational format of a lecture deliberately confuses fact and fiction to comment (in a manner not dissimilar from Serra’s almost 40-year-old video) on the authority conceded to particular forms of communication and the need to give greater critical consideration to the information we receive from those channels.

Scott King (born 1969; lives and works in London) is an emerging artist whose work draws on the culture of pop and rock music and crosses visual art strategies and sensibilities with those of graphic design. His work has been presented in solo exhibitions at the Kunstverein Munich; the FRAC Nord-Pas-de-Calais, Dunkerque, France; White Columns, New York; and in such group exhibitions as All that is Solid Melts Into Air at the Palais de Tokyo, Paris; and Sympathy for the Devil: Art and Rock and Roll Since 1967 at the Museum of Contemporary Art, Chicago.

Richard Serra (American, born 1939, lives and works in New York) is one of the preeminent figures in postwar art, recognized primarily for sculptural works in torqued, weathering steel such as Joe (2000) in the courtyard of the Pulitzer Foundation for the Arts, St. Louis (next door to the Contemporary Art Museum St. Louis). 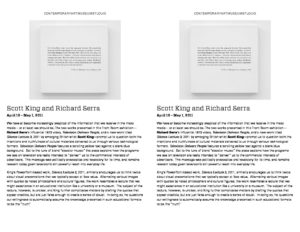