Paris-based American artist Sheila Hicks has been creating hand-woven, abstract fiber-based installations and sculptures for nearly sixty years. From large-scale commissions to gallery exhibitions, her multifaceted practice traverses the spheres of commercial production and fine art and simultaneously references indigenous traditions from around the world. The artist plays with and builds on classical textile techniques—weaving, crocheting, dyeing, spinning—to develop her own experimental and idiosyncratic style, incorporating natural fibers, synthetic blends, and even everyday office supplies. Hicks’s tactile objects and installations of riotous color and breathtaking form expand fiber’s kinship to both painting and sculpture.

Featuring works from the 1960s to the present, this exhibition brings together major works from private collections and the Saint Louis Art Museum with recent examples of the artist’s ongoing series of small-scale portable weavings, or minimes. The works on view exemplify a number of formal leitmotifs that Hicks has returned to over the years. Modular arrangements recur throughout her practice, as in The Evolving Tapestry: Blue (1967–68), a collection of twenty-five woven units of fringed linen and silk and Voyage of Serpentina (1985), comprising nineteen stuffed and knotted silk tubes and brightly colored skeins of fiber. Her ongoing interest in the relationship between painting, sculpture, and textile media is explored in works like Masonry Panel (1981) and Forêt de Lin Wall Hanging (c. 1968, reconstructed 1983), a large-scale diptych of undyed, wet-spun linen tassels that cascades off the wall in a reinterpretation of bas-relief. Other works demonstrate Hicks’s playful adaptation of quotidian materials and interest in industrial design. The minime Ringlets (1993), for instance, is made of intertwined multicolored rubber bands and paper clips and also serves as a study for larger objects. Still other works incorporate elements of the natural world, including feathers and porcupine quills. Together, these works map a cross-section of Hicks’s practice over the last fifty years and exemplify her masterful and ongoing articulation of color, materiality, space, and scale.

Sheila Hicks (b. 1934, Hastings, Nebraska) lives and works in Paris. Recent solo exhibitions include Foray into Chromatic Zones at the Hayward Gallery, London (2015), and L’État du Ciel at the Palais de Tokyo, Paris (2014). The major survey Sheila Hicks: 50 Years debuted at the Addison Gallery of American Art in 2010 and traveled to the Institute of Contemporary Art, Philadelphia, and the Mint Museum, Charlotte, North Carolina in 2011. Hicks’s work has been widely exhibited in major group exhibitions including Threadlines, The Drawing Center, New York (2014); The Whitney Biennial, Whitney Museum of American Art, New York (2014); and Fiber: Sculpture 1969–Present at the Institute of Contemporary Art, Boston (traveling to the Wexner Center for the Arts, Columbus, Ohio, and the Des Moines Art Center, Des Moines, Iowa) (2014–15).Her work is in the collections of the Metropolitan Museum of Art and the Museum of Modern Art, both in New York City; Museum of Fine Arts Boston; The Art Institute of Chicago; Centre Georges Pompidou, Paris; Museo de Bellas Artes, Santiago, Chile; the Museums of Modern Art, Tokyo and Kyoto; and many others. Hicks is the recipient of numerous awards, including the Smithsonian Archives of American Art Medal (2010), Officier des Arts et des Lettres, France (1996), and an Honorary Doctorate from the Rhode Island School of Design. 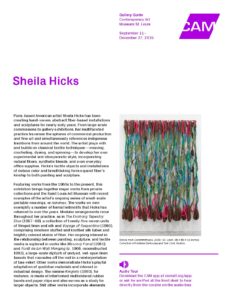