Exploring the undercurrents of contemporary domestic life, Shoot the Family focuses on artists’ portrayals of their own families: photographs and video works of relatives and partners that can be harrowingly intimate, questioning any pretense of objectivity between image-maker and subject. Made during the last ten years by artists active in North America, Europe, and Asia, the works on view show the influences of traditional family snapshots and documentary and staged photography, as well as Conceptual art and performance art.

These artists offer a multi-layered representation of the family as a dynamic social institution, revealing that family matters are never simply personal but inevitably encompass broader historical, anthropological, and economic considerations. Presenting scenarios of emotional closeness as well as failed connection, they expose suppressed ambivalence and conflict, fantasy and eroticism. Gillian Wearing, in making “portraits” of her family members, goes to great lengths to transform herself into the portrayed relatives, having her face altered by makeup artists and even using prostheses on her face and torso; the portrait included in this exhibition is ostensibly that of her brother, but the uncanny picture of a young man is actually of the artist herself. Also included is a work from another deeply moving series, Mitch Epstein’s photographic exploration of the collapse of a family business in the northeastern United States, which reveals the broader context of a family’s difficulties. Many of the works in the exhibition link the family to a nexus of social issues, including class and financial status, the transmission of gender and ethnic stereotypes, shifting marital and generational roles, and the impact of war and immigration. Emotionally incisive, conceptually diverse, and visually inventive, the photographs and videos in Shoot the Family transform that most familiar artifact—the family photograph—into an illuminating investigation of contemporary culture.

Shoot the Family is organized by Independent Curators International (iCI), New York and curated by Ralph Rugoff, director of the Hayward Gallery, London. 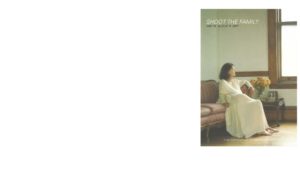