Two digital video works by New York-based artist Slater Bradley explore the theme of obsession. Since 1999, Bradley has been collaborating with Benjamin Brock, who disarmingly resembles Bradley, and who plays the part of the artist in several of Bradley’s videos. The Year of the Doppelganger (2004-2005) stars Brock as Slater Bradley, acting out the familiar adolescent fantasy of rock stardom by playing what Bradley calls “the most famous drumbeat in the world,” Led Zeppelin’s “When the Levee Breaks.” Brock begins his solo performance in an empty University of Berkeley Memorial Stadium, where he is soon joined by the Cal football team who immediately begins practicing. Apparently unaware of each other, differences are accentuated: teamwork vs. individual glory, and the beefy older–looking physique of the football players vs. the scrawny, adolescent appearance of the drummer. Despite these obvious differences, what soon emerges is an unlikely and surprising allegory that reveals parallels between the artist and the athlete, namely the struggle for fame, the aspiration for perfection, and the tedium of repetition and hard work.

The second video piece, titled My Conclusion/My Necessity (2005-2006) is Bradley’s most recent work to date and takes place in the Cimetiere du Pere-Lachaise (a cemetery in Paris). A teenage girl is visiting this famous site whose permanent residents include Jim Morrison, Honore Daumier, Frédéric Chopin, Isadora Duncan, Honore de Balzac, and Edith Piaf. We watch as her mother teaches her how to go through the ritual of leaving a lipstick kiss on the gravestone of her choice, in this case, Oscar Wilde. In this coming of age video, Bradley intertwines the roles of stardom, adulation, ritual, and immortality.

This exhibition is organized for the Contemporary Art Museum St. Louis by Paul Ha, Director. 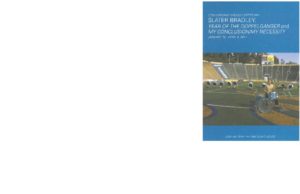