For this Front Room exhibition, Sreshta Rit Premnath has made several new works that reflect his ongoing interest in the visual representations of power. The exhibition’s title, Folding Rulers, is also the name given to a series of eight printed vinyl banners featuring silhouettes of a human figure. Premnath created the images by placing folding rulers—a construction tool used for measuring angles and distance—in a sandbox and photographing the resulting composition. Despite their resemblance to commemorative portraits or busts found in private homes and public spaces, the content of the works remains abstract and unresolved.

Premnath’s invocation of the “sandbox” is motivated by an interest both in the American military’s use of the word to refer to the Middle East and in the use of the actual object as constructive psychotherapeutic tool to reveal an individual’s memory or past trauma. This association is established in the Folding Rulers portraits and in Sandbox (2012)—used military combat boots filled and overflowing with sand that become stand-ins for soldiers themselves, confronting anonymous portraits of power drawn in the sand. Together, these works, along with several others in the gallery, not only point to the seismic shifts currently underway in our contemporary geopolitical landscape but also actively imagine a future yet to be written.

Sreshta Rit Premnath (b. 1979, Bangalore, India) lives and works in New York City. A recipient of an Art Matters Foundation grant in 2011, he has also participated in several residencies through the Civetella Ranieri Foundation, Umbria (2011); Skowhegan School of Sculpture and Painting (2009); and Whitney Independent Study Program (2008). Premnath has had solo exhibitions at Tony Wight Gallery, Chicago (2012); Galerie Nordenhake, Berlin (2011); Wave Hill, New York (2011); Gallery SKE, Bangalore (2010); Art Statements, Art|41|Basel (2010); among others. His work has also been presented in numerous group exhibitions, including at Michele Didier, Paris (2012); Yerba Buena Center for the Arts, San Francisco (2011); Galerie Balice Hertling, Paris (2010); 1A Space, Hong Kong (2010); and Friedman Benda Gallery, New York (2010). Premnath is the founder and co-editor of Shifter Magazine. He received his MFA from Bard College (2006). He teaches in the MFA program at Parsons College, New York and is the 2012 Arthur Levitt Fellow at Williams College, Williamstown, MA. 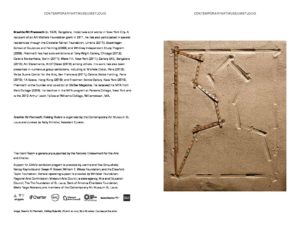