For CAM’s Street Views, projected on the museum facade from dusk to midnight, Los Angeles-based artist Stanya Kahn has both recycled marks from her paintings and digitally created new figures with no real-world reference point. Friends in Low Places, a new large-scale video made for this exhibition, combines the familiar with the newly invented, a strategy central to Kahn’s art-making. Her practice embodies metaphors for making change in the world, thinking beyond limits and laws, allowing the uncanny to emerge, and embracing complication over simplification.

Blooming with color against a stark black background, Friends in Low Places is at once ominous and hopeful. Kahn refers to the work as “an allegorical visual poem for the struggles of humanity against the state,” for self-determination, and for the “dissolution of borders.” Within the animation figures morph into abstract shapes and vice versa. The character and moods of the shapes and figures are also in flux, rapidly shifting, a state of change both unsettling and auspicious. The story begins and ends with water—itself a material that radically transforms from droplet to river to mist—and to Kahn is “a crucial resource and symbol of those things that shouldn’t be owned or sold, contaminated or squandered.” 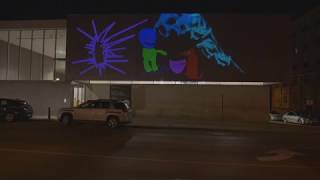 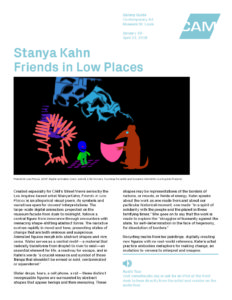