Projected one-at-a-time over the course of two weeks, the works of these five artists point to the intersection of film and performance:

Simultaneously taking on the roles of director, performer, editor, composer, and narrator, Korean artist Sung Hwan Kim creates dreamlike videos which examine misremembered information and the subjective nature of history. Kim disrupts any linear projection through the use of sharp editing and illogical sequencing, while maintaining a loose narrative structure and aesthetic coherence.

German artist Clemens von Wedemeyer addresses the absurdity of socio-historical phenomena by appropriating classic films, along with research material and documentary footage. Big Business (2002), a remake of the 1929 Laurel and Hardy comedy, follows the harebrained escapades of two salesmen—played by prison inmates—who manage to demolish a house and wreck a car.

Existing in a realm between theater, cinema, and reality television, Alix Pearlstein’s dramatic video installations cast a spotlight on the savagery of primary human instincts and interaction. In Goldrush (2008), Pearlstein directs a group of nine performers (including herself) who grab at, tear apart, and scrap over a seemingly invaluable object, a single sheet of foam core.

Belgian artist Sven Augustijnen’s film L’Ecole des Pickpockets (2000), observes the teachings of two master petty-thefts on the invisible sleights-of-hand—a true “work of an artist.” Appealing to our voyeuristic nature, the camera follows its subjects closely, yet the documentary-style presentation of this clandestine lesson leaves the viewer struggling to distinguish between fact and fiction.

French artist Aurélien Froment’s diverse range of work includes films, photographs, manuals, and other object-based installation. Addressing our ability to process the image-saturated world that surrounds us, Froment uses a careful balance of revelation and concealment to confuse our recognition of images and their combined associations. Employing the spectacle of magic, Theatre de Poche (2007) addresses the constant reshuffling of our field of vision, and reveals the trickery behind the image making process. 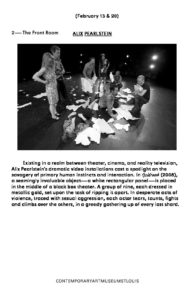