Takeshi Murata: Melter 2—the second exhibition in the Street Views series of large-scale video art—transforms the Museum’s Washington Boulevard facade into a brightly colored animation that undulates, drips, and melts from one form to another. The Street Views series is made possible by the 2013 Innovation Fund grant awarded to CAM by the Regional Arts Commission, created to support groups that think in new ways and take risks to accomplish artistic or administrative goals.

Opening January 24—and on view from dusk to midnight every evening through April 27—Melter 2 is a beacon for passersby, enlivening CAM’s Grand Center neighborhood with a vibrant and playful monumental work that is accessible to all.

Over the last decade, Takeshi Murata has received critical acclaim for his videos ranging from hand-rendered animations of fluidly morphing shapes to painterly abstractions of digital code. Across his work, Murata’s sophisticated technical strategies result in new forms that are at once familiar yet uncanny. First created in 2003 and a key example of recent new media art, Melter 2 has been reconfigured from its original version to fit CAM’s 62-by-18-foot metal facade. In the animation, a floral form ebbs and flows, filling the screen with vibrant colors and transforming into new shapes that continually melt into one another. The almost cartoonlike forms allude to a range of references, including nature, 1960s psychedelia, and 21st-century glitch art. 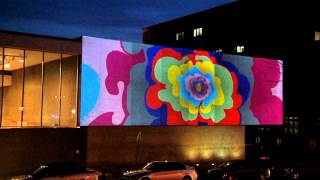 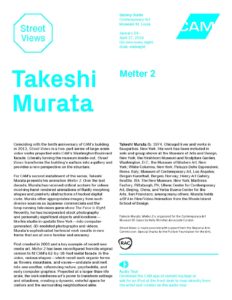