The Complaint Choir is an independently producible project initiated by the Finnish artists Tellervo Kalleinen and Oliver Kochta-Kalleinen.

Inspired by the Finnish idea of  “Valituskuoro”—literally “complaints choir”—the artists created the first choir in 2005 at an artists’ residency in Birmingham, England, and have since given the project over to be executed worldwide in cities such as St. Petersburg, Russia, Chicago, and Florence, among others. The Complaint Choir is formed by the collection of complaints from people around a given city, which is then translated into a musical score by a local composer and performed by a choir comprised of residents of the host city. The project is intended to suggest a sense of communal endeavor through the cathartic process of airing of negative thoughts and feelings about the city one lives in, while engaging a comic tension between the “serious” expressive form of choral music and the often frivolous nature of the complaints.

Tellervo Kalleinen (born 1975) and Oliver Kochta-Kalleinen (born 1971) live and work in Helsinki. Their work has been featured in exhibitions at the Mori Art Museum, Tokyo; Artspace, Sydney; and KIASMA, The Museum of Contemporary Art, Helsinki 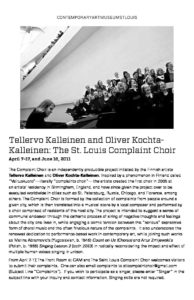