For her first residency in the United States, Georgian, Berlin-based artist Thea Djordjadze creates an installation of new works on site. Djordjadze translates commonplace household and construction materials into poetic objects, gathering found materials from local architectural salvage yards. The installation involves a meticulous process revealing the artist’s interest in the act of creation and the resulting sculptural forms, which incorporates plaster and acrylic paint with carpet, mirror, clay brick, and metal screens. In this way, Djordjadze’s art practice resembles the procedure of the “scientific method” that has become standard since the 17th century, consisting of systematic observation, measurement, experimentation, and the formulation, testing, and modification of hypotheses. The title of her new exhibition at CAM, His Vanity Requires No Response, is taken from the third chapter of T.S. Eliot’s (English, 1888-1965) epic poem The Waste Land: THE FIRE SERMON (1922), to evoke Djordjadze’s deft gesture of creating work and meaning in a fast, if even sketch-like, process.

Best known as the founder and central organizer of the international artists’ collective Fluxus from 1962 until his death in 1978, the Lithuanian-born American artist George Maciunas extended art and the role of the artist beyond conventional boundaries. He made organization itself integral to his practice, and produced a dizzying array of objects, performances, posters, plans, charts, atlases, newspapers, and other ephemera that cut across art, art history, world history, architecture, design, typography, musicology, film, editing, publishing, genealogy, and pedagogy. His innovative graphic design gave Fluxus its unique visual identity, including the branding of Fluxus “products” as “anti-commodities.” A philosophy of economy—greatest use-value for least cost—informed everything he did. Humor was also essential to his art and life. He loved the simplicity of Vaudeville and the films of Buster Keaton, and wanted Fluxus to have the expulsive power of a good joke. Fluxus works were unpretentious, amusing yet thought provoking, and obtainable by everyone. Ultimately, he believed, art should be something anyone can do. This small presentation of Maciunas’s graphic design, charts, ephemera, and films offers an introduction to an exceptional yet still underappreciated postwar artist. 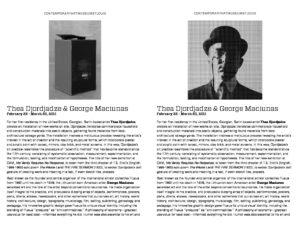