On view September 6–December 29, Chrysler Tapete (1970) is one of a number of wallpaper works that renowned German artist Thomas Bayrle has created since the late ’60s. In it, single elements are repeated until their individuality collapses into a massive whole, suggesting tensions between a positive, collective experience and a feeling of stifling uniformity. A key figure in European Pop Art—often referred to as Grey Pop—Bayrle has worked in painting, sculpture, fashion, and graphic design since the mid-1960s.

Bayrle’s work explores how physical space, scale, and pattern can affect the viewer and provides an emphatic reminder of how our culture of mass production and consumption impacts our understanding of the world. With its dense visual presence, Chrysler Tapete contrasts with the spare forms on view in the concurrent Place is the Space exhibition. Both exhibitions coincide with the tenth anniversary of CAM’s building and provide new ways to consider the space itself. 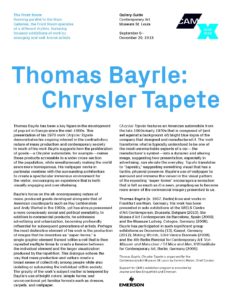