An American artist living in Turin, Tom Johnson produces sculptures, video monologues, and live performances. His introspective artworks explore ideas of intimacy, etiquette, shared public space, and the terms of social interaction. He presents a new series of drawings in the Front Room.

In his most recent series of drawings Johnson has undertaken a new effort. If we imagine, for a moment, that any artwork is a type of proposal, Johnson’s earlier works have tended to propose frustration, anger, and a utopian belief that it might be possible to pierce the veil and live more authentically. By contrast, his new drawings are less dramatic and more theatrical. Their conscious theatricality consists of a meditation on how to present drama with the use of scenery, ornament, and vague surrealism. Protected by the stage-curtain of theater, Johnson’s work has become more private and guarded; as such, he proposes, it has become more natural. 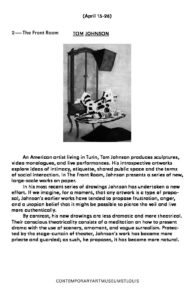