Untold Stories is a series of mixed-media drawings—created specifically for this exhibition—by emerging Nigerian-born, New York-based artist Toyin Odutola. Featuring works on paper made with charcoal, pastel marker, graphite, and acrylic ink, the presentation considers the nature of portraiture and storytelling and includes text panels for the first time, bringing the idea of character and narrative to the fore in a new way.

Known for her heavily worked portraits, Odutola’s drawings comprise a variety of mark-making—incorporating short, repeated hatches with sinuous outlines—that build a richly detailed yet simultaneously abstracted image. Figures are surrounded by backgrounds that range from unmarked, pure paper to bold, multifaceted patterns. While the features of Odutola’s sitters are minutely rendered, the dark tones of their faces and bodies create a flattening of the image that borders on silhouette. The resulting likenesses are at once descriptive and emotionally charged.

In Untold Stories, Odutola juxtaposes closeness with distance and the familiar with the foreign. In new diptychs and triptychs, the artist places stand-alone portraits and still lifes with text-only drawings, creating narratives that rest intriguingly between the truthful and tangible and the suspect and elusive. Within the space of the exhibition, the works activate one another, and the audience is invited to create connections, piecing together their own stories.

Toyin Odutola (b. 1985, Ife, Nigeria) lives and works in New York. Recent solo exhibitions include Like the Sea, Jack Shainman Gallery, and Toyin Odutola: The Constant Wrestler, Indiana Museum of Contemporary Art, Indianapolis. Odutola has also exhibited at the Studio Museum in Harlem; the Menil Collection, Houston; and the Museum of Contemporary African Diasporan Arts, Brooklyn. She was the recipient of the Murphy and Cadogan Fellowship Award in 2011 and her work is in the permanent collections of Birmingham Museum of Art, Alabama; the Contemporary Museum, Honolulu, Hawaii; and the National Museum of African Art, Smithsonian Institution, Washington, DC. She earned a BA from the University of Alabama in Huntsville and an MFA from California College of the Arts. 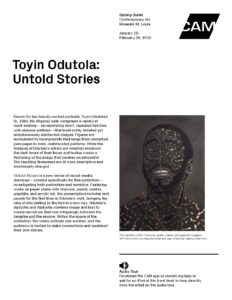 “Tell Me a Story, I Don’t Care If It’s True”: New works on paper by Toyin Ojih Odutola