Wagon Wheel is the first major museum exhibition in the Midwest of Paris-based German artist Ulla von Brandenburg as well as the US premiere of her seven-part quilt series. The presentation comprises the individual works Wagon Wheel, Bear Paw, Drunkard’s Path, Flying Geese, Log Cabin, Monkey Wrench, and Tumbling Blocks (all 2009), suspended in CAM’s lobby so that visitors may walk among them. Von Brandenburg created the quilts following an extended research-based stay in Memphis, Tennessee, where she studied the traditions of predominantly female collectives in the American South (such as in Gee’s Bend) as well as the quilt patterns, symbols, and signs used by enslaved people to communicate coded messages plotting escape through the Underground Railroad in nineteenth-century America. Wagon Wheel demonstrates the singular power of folk vernacular to provide incisive sociopolitical commentary on a landmark episode in American history.

Working in a variety of media, including film, performance, and installation, von Brandenburg builds layered narratives that examine collective cultural experience and the construction of perception. Over the past decade, she has developed a sophisticated practice that uses elements of theater, architecture, and other historical cultural phenomena to investigate the behavioral codes and social mores of the present. Often she employs archaic strategies such as the tableaux vivant, silhouetted figure, or nineteenth-century costuming to further elucidate the connections between historical events and contemporary life.

In her installation at CAM, the artist reimagines the Underground Railroad’s coded visual language. For example, while the exhibition’s eponymous “wagon wheel” quilting pattern traditionally features a wheel surrounded by radiating spokes and ostensibly carried the hidden directive of packing one’s belongings for an epic journey to freedom, von Brandenburg alters it by zooming and then cropping it. The resulting object thus toes the line between sociopolitical imperative and colorful abstraction, obscuring the quilt’s originally subversive function.

Fabricated from old clothing, curtains, tablecloths, and other fabric remnants, the vivid compositions of von Brandenburg’s formidable objects recall folk art aesthetics and the Pattern and Decoration movement as well as the reserved elegance of modernist painting. At CAM, von Brandenburg’s quilts hang throughout the lobby in a staggered arrangement, serving as a route of rehabilitative passage. Each textile thus inhabits a space between utility and possibility, comfort and covertness. Taken on the whole, von Brandenburg’s presentation similarly proposes an experience of resolve and discovery, ultimately offering a larger rumination on history and justice to showcase the resilience of the human spirit in the face of seemingly insurmountable adversity. 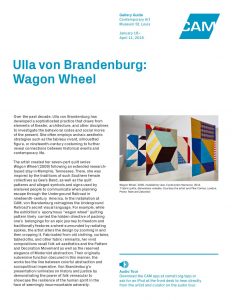