We didn’t ask permission, we just did it…

The exhibition We didn’t ask permission, we just did it…, guest curated by Manuela Paz and Christopher Rivera of Embajada, revisits three seminal series of exhibitions in Puerto Rico, from 2000 to 2016, that ushered in an independent spirit of art making that is now prevalent in the region: M&M Proyectos’ PR invitationals, organized by Michy Marxuach; the Gran Tropical Bienals, founded by Pablo León de la Barra; and Cave-In, initiated by Mike Egan. The original projects, which took the form of idiosyncratic biennials, happenings, or interventions by artists working in an array of unconventional mediums and international in scope, in part spurred the self-reliant gallery community flourishing in San Juan, Puerto Rico today. The exhibition conveys the sense of the ambition, collective action, and self-sufficiency of the artist-makers in and from Puerto Rico, despite infrastructural limitations.

The exhibition draws on the archives of each project, following a timeline and featuring a selection of original artworks, documentation, and ephemera paired with recreated artworks commissioned for this exhibition. The presentation at CAM extends into multiple spaces of the museum, including the Front Gallery, Street Views, an intervention in the café, and a selection of sculptures in the courtyard.

We didn’t ask permission, we just did it… is organized for the Contemporary Art Museum St. Louis by guest curators Manuela Paz and Christopher Rivera of Embajada, San Juan. 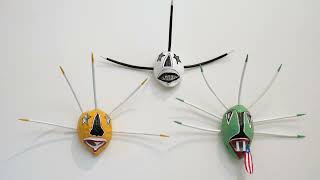 Contemporary Art Museum St. Louis · We didn’t ask permission, we just did it…
View all tracks 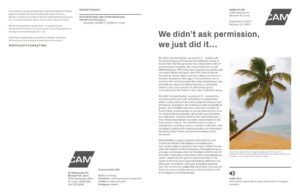 Top 5 things to do in St. Louis this weekend: September 9–11

A Guide to Arts and Culture this September