Play it by Trust

Yoko Ono’s Play it by Trust (1966/2011) is an all-white, interactive chessboard that functions as a metaphor for the futility of war and extends the artist’s interest in the expressive potential of chance. By eliminating the color-based opposition of one side versus another, Ono dooms any attempt to successfully “play” the game beyond a series of initial moves to ultimate failure. She thus encourages us to consider the aspects of humanity that unite rather than divide. Play it by Trust joins the many conceptual, musical, and performative works that Ono has created for over 40 years that evoke her dedication to the promotion of peace in our society. It was first exhibited in 1966 at the Indica Gallery in London and since then it has been re-presented in various sizes and for numerous different occasions. This presentation of Play it by Trust has been developed in cooperation with the opening of the World Chess Hall of Fame in St. Louis this fall.

Yoko Ono was born in 1933 in Tokyo, Japan and lives and works in New York City. An iconic international avant-garde figure, she is also recognized for her crucial early role in the art movement Fluxus (1962-1978). She has recently presented solo exhibitions at the Baltic Centre for Contemporary Art, Gateshead, England (2008-2009), The Ke Center for the Contemporary Arts, Shanghai, China (2008), and the Japan Society in New York (2000). She has recently participated in group exhibitions such as “The Third Mind: American Artists Contemplate Asia, 1860-1989,” at the Guggenheim Museum, New York (2009), and “WACK!: Art and the Feminist Revolution” at the Museum of Contemporary Art, Los Angeles (2007.) Recent albums include Between my Head and the Sky (2009), Yes, I’m a Witch (2007), and Open Your Box (2002). 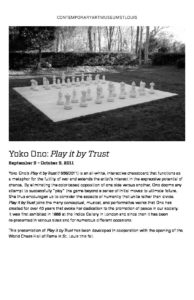