Japanese artist Yuki Kimura’s installations, in which photographic images also function as sculptural objects, prompt us to investigate the material world through its artifacts. She frequently combines appropriated photographs and original photography with found objects, ephemera, and even furniture to build new sites for exploration. The interpretation of the complex narrative systems that she creates relies on a delicately balanced relationship between the viewer, the picture(s), the object(s), and the overall space of her installations. Kimura’s work thus fragments and disrupts such visual and conceptual frameworks as still-life, portraiture, design, architecture, landscape photography, and sculpture.

For her first exhibition in an American museum, Kimura has created new works on site that employ found photographs alongside a new object acquired in and around St. Louis. Cultivated nature plays a role in a series of works that suggest domestic interiors, either in the form of a potted plant, or in fist-sized rocks placed atop images of a zoo and/or a hamster pen. Kimura’s carefully staged environments are enigmatic and open-ended in their poetic (and at times unsettling) juxtaposition of images that evoke the past with three dimensional objects that form part of our lived experience.

Yuki Kimura was born in 1971 in Kyoto, Japan, where she continues to live and work. She has presented her work in the solo exhibitions, Untitled, IZU PHOTO MUSEUM, Shizuoka, Japan (2010); Year 1940 was a leap year starting on Monday, Taka Ishii Gallery, Tokyo (2009); and POSTERIORITY, Daiwa Press Viewing Room, Hiroshima (2009). Her work has been widely exhibited throughout Japan and has been recently featured in major group exhibitions, including the Sixth International Istanbul Biennial (1999) and the Yokohama Triennial (2005), in addition to Kaza Ana / Air Hole: Another Form of Conceptualism from Asia, The National Museum of Art, Osaka (2011); Quiet Attentions: Departure from Women, Contemporary Art Center, Art Tower Mito (2011); and MOT Collection: Plastic Memories—to illuminate “now,” Museum of Contemporary Art, Tokyo (2010). 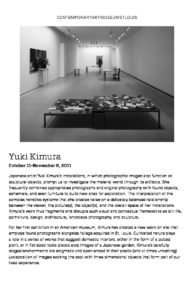