Featuring wind-blown microphones hanging from the ceiling, the work is founded on the concept of ensured randomization. Using the microphones as the initial source, the installation is capable of producing an infinite number of auditory and visual outcomes that respond to viewers passing through the booth, projected on video monitors within the space. Intrinsically linked to the activity at EXPO, Feedback 2 explores the use of autonomous systems in the context of live composition. As an interactive process, the exhibition relies on humans relinquishing all real-time decision making, and instead placing their trust in the nature of technology. Like any complex system design, the installation encompasses a network of actions and reactions, supporting one another to create a continuous system. Unlike industrial systems designed for specific outcomes, the intended design of Feedback 2 is to guarantee unpredictable results.

At EXPO, Williams and Harris represent Audible Interruptions, a series of site-specific sound installations that investigate CAM’s sonic identity. Presented from fall 2013 through summer 2014, the three-part series features works that occupy museum areas—the restrooms, a hallway, and the elevator—that are not traditionally used for displaying art, helping us discover new ways to interact with familiar places.

Brett Williams is a St. Louis–based artist whose work has been exhibited nationally and internationally. He holds a BFA and MFA from the School of the Art Institute of Chicago and is represented by the Bruno David Gallery in St. Louis.

Kevin Harris is a St. Louis–based artist, musician, and engineer. His music has been commissioned by numerous organizations, and his visual art has been shown in various solo and group exhibitions. 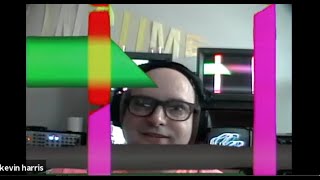 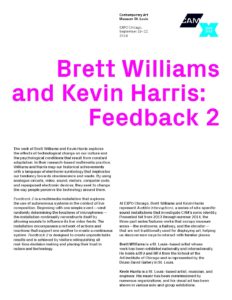