With witty sleights-of-hand, Chihcheng Peng manipulates pre-existing video footage to explore the slippages and ruptures of the routine. His works have reexamined Buster Keaton’s “Sherlock Jr.,” the industrial films of the Prelinger Archives, and amateur footage of San Francisco. In the spirit of his work, Peng appears, disappears, and re-appears in The Front Room, as he presents his video Shadow Your Man (2007) one day each week throughout the month. 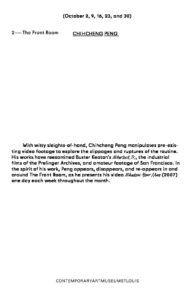