Invested in strategies of appropriation, citation, and montage—as well as histories of European, Russian, and Japanese avant-gardes—Florian Pumhösl constructs new referential systems in his 16mm films and animations, as he mediates graphic, painterly, and architectonic tropes. Pumhösl presents recent films in the Front Room.

In his most recent film, OA1979-3-5-036, Pumhösl translates a Japanese book by Take Hiratsugi from the late 17th century into a 16mm animated film. The book, Gozen Hiinagata (Dress Patterns for Noble Ladies) is one of a multi-voume pattern catalogue with examples of the earliest Japanese kimono designs. In Pumhösl’s film these patterns are selected, simplified and rearranged, all forming a new typology of graphic fragments, where the cuts in the film represent books turning pages. 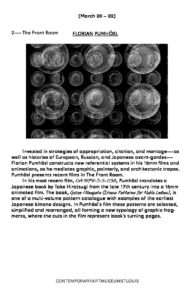